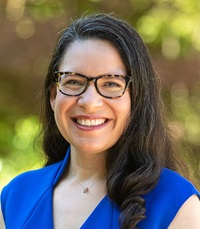 Angela Barranco was appointed Undersecretary to the California Natural Resources Agency in May 2019. As Undersecretary, Angela oversees an agency of nearly 21,000 employees charged with protecting and managing California's diverse resources. This includes stewarding the state's forests and natural lands, rivers and waterways, coast and ocean, fish and wildlife, and energy development.

At the state, federal, and local levels, Angela has served as a non-profit executive, communications and outreach strategist, and Obama Presidential appointee. Before she was appointed Undersecretary, Angela was Chief Executive Officer at River LA, a non-profit focused on bringing together the Los Angeles region through the reimagining of the L.A. River as a multi-benefit urban infrastructure. As a Presidential Appointee, Barranco led public engagement for the White House on environment, conservation, climate, and energy issues and served as Deputy Chief of Staff at the U.S. Department of Housing and Urban Development. Barranco has also managed and advised political campaigns across the country, including as National Western Regional Director for the Obama 2012 re-election campaign. Additionally, she has led communications and environmental policy efforts at the U.S. Congress, state, and municipal levels.

Angela received a bachelor's degree in Environmental Biology from Columbia College, Columbia University, with a focus on conservation. She is bilingual and fluent in Spanish.