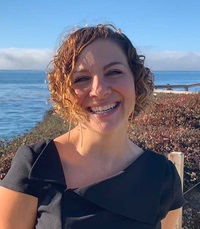 Jenn Eckerle is the Acting Deputy Secretary for Oceans and Coastal Policy at the California Natural Resources Agency and Acting Executive Director of the Ocean Protection Council (OPC).  Jenn serves as a key advisor to the Governor and the Secretary for Natural Resources and directs policy, scientific research, and critical partnerships to increase protection of California’s coast and ocean. Jenn served as OPC’s Deputy Director from December 2016 to October 2022. Before joining OPC, Jenn spent eight years as an Ocean Policy Analyst for the Natural Resources Defense Council, where she conducted technical analysis and developed policy recommendations to advance ocean conservation. Prior to that, she was a Coastal Program Analyst for the California Coastal Commission and the San Francisco Bay Conservation and Development Commission. Jenn earned an M.S. in Marine Biology from the Florida Institute of Technology and a B.S. in Biology from the University of Vermont.