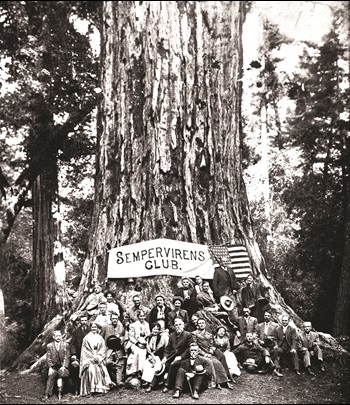 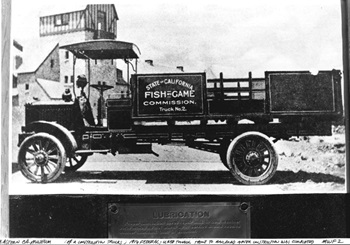 One of the trucks used to transport young fish from the Mt. Whitney Fish Hatchery to high mountain lakes. Photo circa 1916 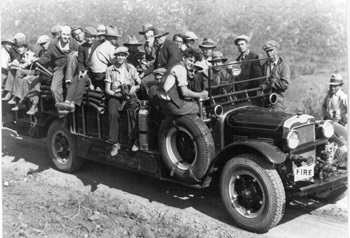 Our Agency’s story begins more than 150 years ago during California's formative years. Most of the state's natural resources were under federal jurisdiction, but as California's population and needs grew, so did a desire for a closer-to-home approach to protecting the state's wildlands and wildlife. These sentiments led to the creation of the Board of Fish Commissioners in 1870 (the first wildlife conservation agency in the country), the Division of Forestry in 1881 (housed within the state’s Department of Agriculture) and the Board of Forestry in 1885.

During this same period, federal and state leaders began to set aside land for preservation and public access. President Abraham Lincoln signed a federal law in 1864 that granted Yosemite Valley and Mariposa Big Tree Grove to create California’s first state park. In 1901, both land grants were returned to the federal government. A year later in 1902, the state purchased 2,500 acres of redwood forests in Santa Cruz to create Big Basin Redwood State Park, California's longest-running state park.

At the turn of the 20th Century, California's emerged on the forefront of the preservation movement by expanding fish and game laws, establishing a state forester to regulate timber harvest, acquiring historical monuments, and passing the Water Commission Act in 1913 to establish the State Water Commission to oversee rights to use surface water.

Over recent decades, the Resources Agency has grown to include a total of six departments, 10 conservancies, 17 boards and commissions, three councils, and one urban park in Los Angeles that consists of two museums, the California Science Center and the California African American museum.

In 2009, the Resources Agency adopted its current name of the California Natural Resources Agency to better reflect its primary mission of protecting the state's natural resources. The Agency's mission statement:

"To restore, protect and manage the state's natural, historical and cultural resources for current and future generations using creative approaches and solutions based on science, collaboration, and respect for all the communities and interests involved."

Today our Agency is on the frontlines maintaining California's unparalleled biodiversity, building climate, water and wildfire resilience, and ensuring access to natural lands for all Californians. Our Agency’s more than 19,000 employees help steward 100 million acres of California's land, hundreds of rivers and lakes, and more than 1,000 miles of coastline. Our departments protect California's restore wildlife habitat, operate parks, deliver water, respond to wildfires, preserve cultural and historical resources, and manage the economic use of energy sources. Our work is driven by a desire to create a more equitable and sustainable future where natural resources are valued by all.

Department of Fish and Wildlife

Department of Forestry and Fire Protection

Department of Parks and Recreation

Need help, or have a question? Email us.