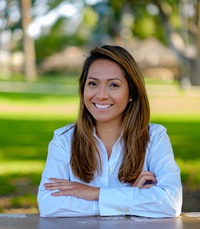 Andrea Ambriz joined the California Natural Resources Agency in August 2020 as the Deputy Secretary of External Affairs. Andrea oversees engagements with community leaders, intergovernmental partners and cross-industry stakeholders. She previously served as Chief Operating Officer at non-profit River LA, and as Chief of Staff at SEIU Local 2015. She has also served in various roles in the U.S. federal government, including for 44th U.S. President Barack Obama as White House Deputy Director of Private Sector Engagement and at the U.S. Department of the Treasury in multiple positions. Andrea has also worked for both the California State Senate and Assembly, advising legislators on diverse policy areas, including helping champion the allocation of over $400 million equitably to park-poor neighborhoods across California and supporting landmark clean-air legislation. She is a Los Angeles native, and has earned undergraduate degrees from DePaul University and holds a Master of Public Policy degree from the University of California, Berkeley. Andrea can often be found visiting local beaches and dog parks with her pup.